Proposal for a symbol to represent the city of Aalborg

By virtue of their placing on either side of a broad belt of water, the Liim Fjord, Aalborg and Nørresundby have a very special geographical location. As traffic artery and connecting link the bridge across the fjord occupies a central place in the minds of the inhabitants of the two cities. The proposal is for the bridge to be accentuated as a shining line that links the two urban spaces and retains the rays of the evening sun on the bridge until the red light of dawn returns.

A warmly glowing reddish/orange line will emerge from the ground at Aalborg’s central meeting-place in front of the new Congress Centre and the projected Music House. The line will be a few centimeters wide and inlaid in the paving. It will run down the right side of Vesterbrogade with its one-way traffic towards the bridge. At intervals the line will disappear and reappear, sometimes in the middle of the road, at others at the edge of the carriageway. At certain significant sites, such as the Moltke Column and the Bull, the line will open up and emit a spotlight in slightly red nuances.

The bridge as a shining line

Conclusion in Nørresundby After the bridge the line will establish itself on the right side of Vesterbrogade, cross the square and reappear in the paving in front of the old city hall at Nørresundby Square – the central meeting-place of the city.

The light line will be incorporated in an artistic strategy for illumination of the city on special occasions that the city wishes to mark. For example, the existing street lighting at Nørresundby Square and the square in front of Aalborg’s Congress Centre can be given a tinge of red and alternative lighting for festive occasions. The four towers of the bridge can also be provided with lighting that can be projected up into the sky. 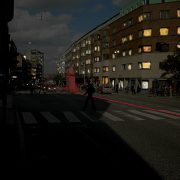 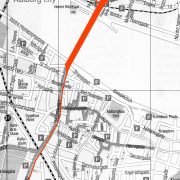